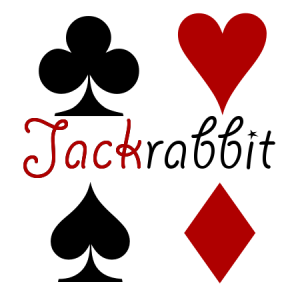 I designed Jackrabbit a few months before my wife and I got married, and I’m glad I did because we played a ton while traveling on our honeymoon. Jackrabbit is a game for two players that uses a standard deck of 52 playing cards. It’s called “Jackrabbit” because the Jack is the most important card…and rabbit…well, just because.

The game plays out like Uno (cards can only be played atop one another if they share a number or suit), except that each player has a stack upon which to lay cards. Each player can play cards on either player’s stack. If you play a card on your opponent’s stack, he or she has to draw a card from the deck, which is bad because the person that goes out first gets bonus points. At the end of the round, each player counts the points in their stack, which are made by stringing together runs and pairs. Sometimes when you play on your opponent’s stack, you break up a potential run. Sometimes, you accidentally help your opponent. In either case, the name of the game is getting the most points in your stack over however many rounds you decide to play.

Deal out ten cards to each player, then each player flips the top card of the draw deck and places it in front of her to begin her “stack.” The player with the higher card goes first. (If tied, choose randomly.)

The object of the game is to score the most points. Points are scored in various ways, and points are not counted until the end of the hand. A game consists of any number of hands needed in order to reach an agreed upon point threshold. (50 points for a quicker game, 100 for a longer game, and so on).

The play area in front of each player is called the “stack.” During a player’s turn, she may play on her opponent’s stack or on her own stack. The cards in the stack stay in the order they are played for point scoring. Cards played in the stack are played atop one another so the cards beneath the top card cannot be seen.

Play passes back and forth between the players as they play a card on either stack. To play a card, place it face up on either player’s stack. The card must share either a number or a suit with the card under it.

For example, Mary’s stack shows a 3♣; from her hand, she can play atop it a 3 of a different suit or any ♣.

For example, Mary’s stack shows a 3♣; from her hand, she plays a 3♠ on top of her own stack. Ben draws a card.

When a player plays a card on her opponent’s stack, the opponent immediately draws a card.

A player must play a card if she can. There are no passes. If a player cannot play, she discards as many cards from her hand as she wishes facedown to the discard pile, drawing the same number of cards from the deck to replace them. Then her turn ends. (She does not play a card on a stack this turn.)

If the deck runs out, shuffle the discard pile as a new deck.

Play continues in turns until a player plays her last card or until the combined total of the draw and discard piles is two cards or less (or in the unlikely event that neither player can play a card from their hand or from the cards cycling through the deck and discard piles).

If a player ends the hand by pairing her last card or playing on another player’s stack, her opponent still draws before the hand officially ends.

We Love Board Games

Board games are awesome. So are card and role-playing games. They bring people together around a table to create a story, to share with one another, to match wits, to collaborate. We gather in the flesh rather than being stranded behind screens. We solve problems together. We exercise our brains. We laugh. We look forward to saying, "Remember the time when...?" That's why I want to share my love of board games with you.

Why is this site called "Human Cleric Games?" Well, I happen to be a member of the Episcopal clergy, a denomination of Christianity. That makes me a "human cleric," which is pretty cool since there aren't too many people out there who can claim a Dungeons and Dragons class as their profession. Now, where did I put my +1 mace?